Is Your Team Not Going the Extra Mile?
Learn How To Build Collaboration, Engagement And Increase Performance Through Democratic Leadership

I have had many leadership roles during my career, ranging from project manager and department manager, to EVP Sales and CEO. I always found it difficult to get the team to go the extra mile, and to work for a bigger purpose than just putting in their hours and get their wages. When I was promoted, I often found myself leading a team with plenty of problems. Team members often:

This lack of team spirit and accountability often required my personal intervention to resolve conflicts or to get things moving. People spoke through me as their boss, rather than directly to eachother. Not only was performance failing, but I found myself overworked, since every little thing required my personal attention in order to keep moving.

These problems kept myself, the team, and the organization from succeeding. I was frustrated, annoyed, and upset, feeling I had been put in an impossible situation. But over the years, I learned how to deal with this, reshape and refocus the team, and get us all moving in the same direction.

At one point, I was the CEO of a company with more than 1000 employees, which was struggling with quality, dropping customer satisfaction, employee turnover, and literally zero innovation. I used all my skills and knowledge as a leader, and we managed to turnaround this international company, more than doubling the profit to more than $30 million within three years. As I was going through this tough time of transforming an entire company, my theoretical knowledge in leadership was also growing. I understood that my own recipe of success, was very much a good implementation of democratic leadership..

You will be able to access the course via the Leadershipahoy Academy for 12 months. Within our course platform, you will get video presentations, but the course works just as well in audio only mode. The eight modules in the course also features exercises and a leadership development plan that you can personalize!

Learn how to USE democratic leadership, not just what it is

A Democratic Leader facilitates discussions and guides the team in the right direction. This enables you to extract powerful ideas by using the experience and perspective of the entire team, not just yourself!

Become a skilled facilitator, capable of gathering the best ideas

A Democratic Leader facilitates discussions and guides the team in the right direction. This enables you to extract powerful ideas by using the experience and perspective of the entire team, not just yourself!

Learn how to create truly common goals, the ones people desire to meet, not just because someone says so, but because they really WANT to! This also instills collaboration since the team has common goals to reach!

Know how and when to empower others for faster decisions and stronger accountability, engagement and performance! Instill collaboration by bringing the team together to reach share ideas and provide solutions!

Here is what is in the course

Let your visitor know how many modules there are and what each one is about.

You will learn the potential of Democratic Leadership, the goals of this course, introduction to the course author, Carl Lindberg, CEO, and some real world examples of democratic leadership to get your inspiration going. 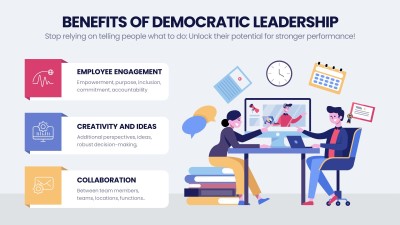 The Science of Democratic Leadership

The Democratic Leadership style has strong support from Science and is a part of several leadership styles theories. This block shows you why democratic leadership is good and what it leads to. Since Emotional Intelligence is of major importance in all leadership situations, you also get a short introduction of that, in order to improve your chances of success. 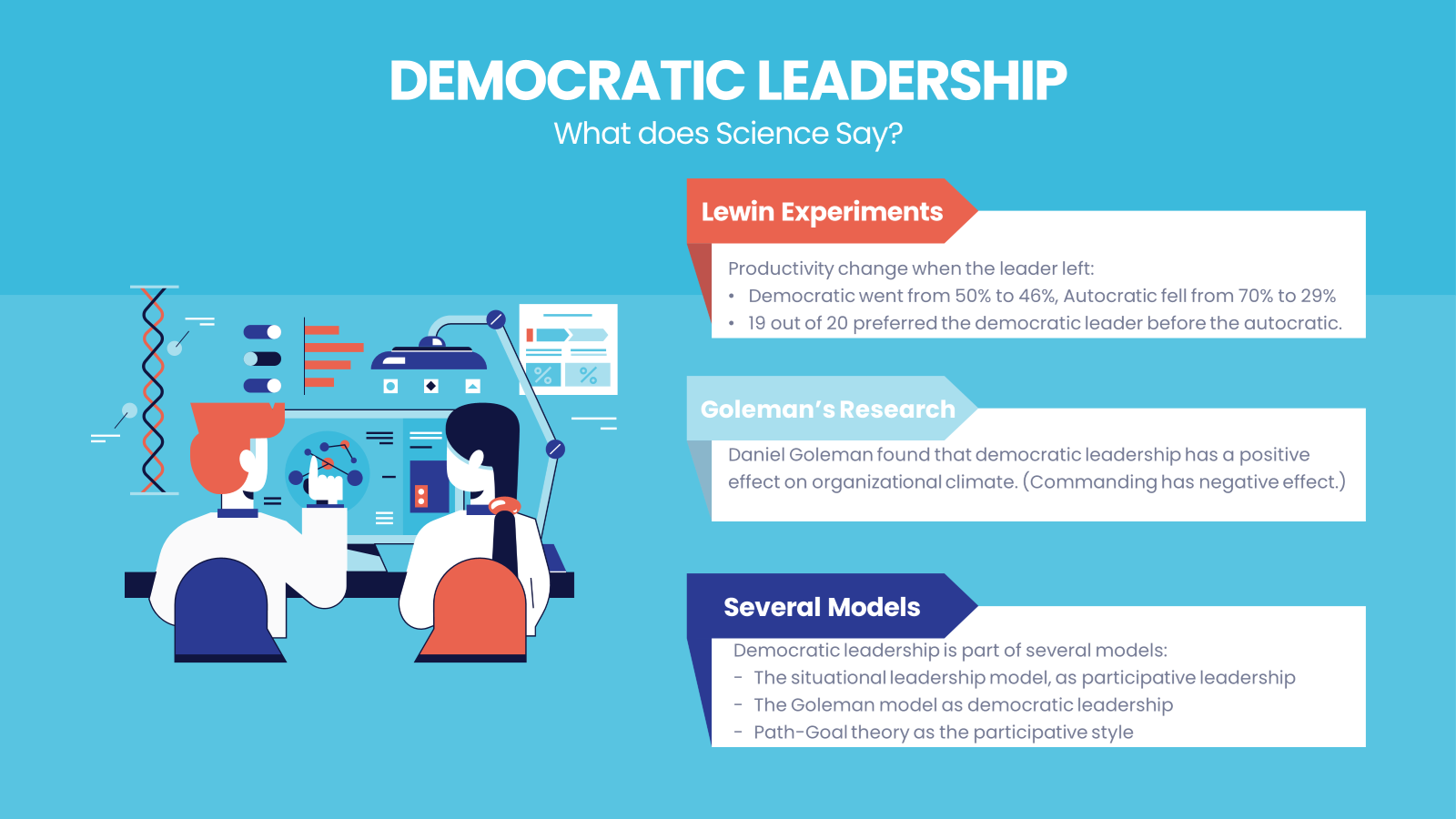 The Advantages of Democratic Leadership

Learn the powerful advantages of democratic leadership, which includes

This module teaches you how to get the most out of the benefits of democratic leadership. 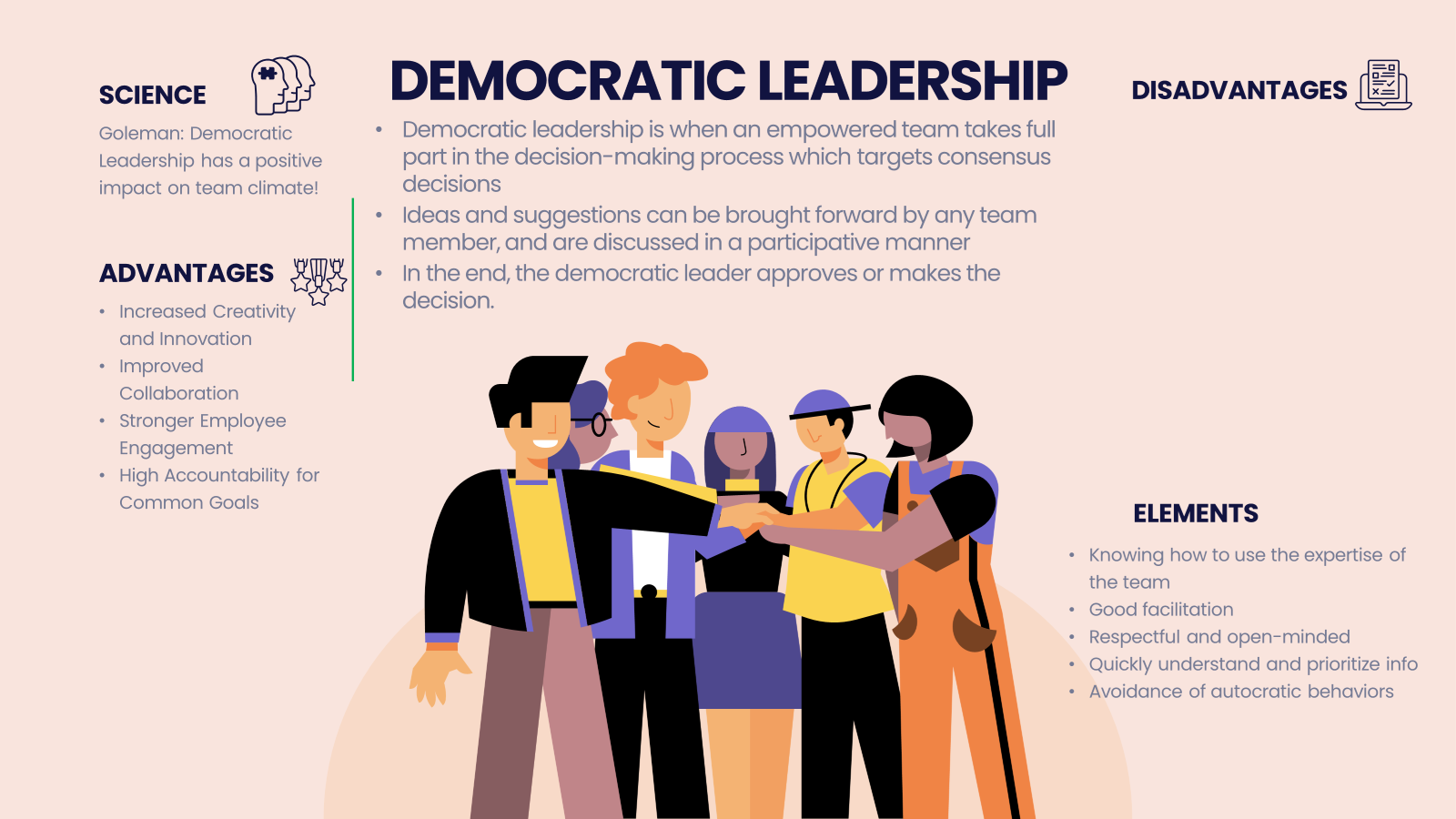 The Elements of Democratic Leadership

Learn about the elements of democratic leadership and how you can put them into place. This knowledge helps you to become the type of open-minded and facilitating leader you need to be to unlock the power of the team!

Module 5: The Disadvantages of Democratic Leadership

Learn about the weaknesses of democratic leadership and how to limit their impact to ensure you only receive the benefits of this powerful leadership style. The disadvantages you will learn are for instance:
- Collaboration can be time-consuming and reduce productivity

- Team members need to be skilled and experienced

- Temporary reductions in productivity can occur

This module teaches you how to get the most out of the benefits of democratic leadership.

Examples of Democratic Leadership in Practice

Learn from several practical examples of how democratic leadership can benefit you in terms of problem solving and generating genuine improvement, collaboration, accountability and empowerment in your team. 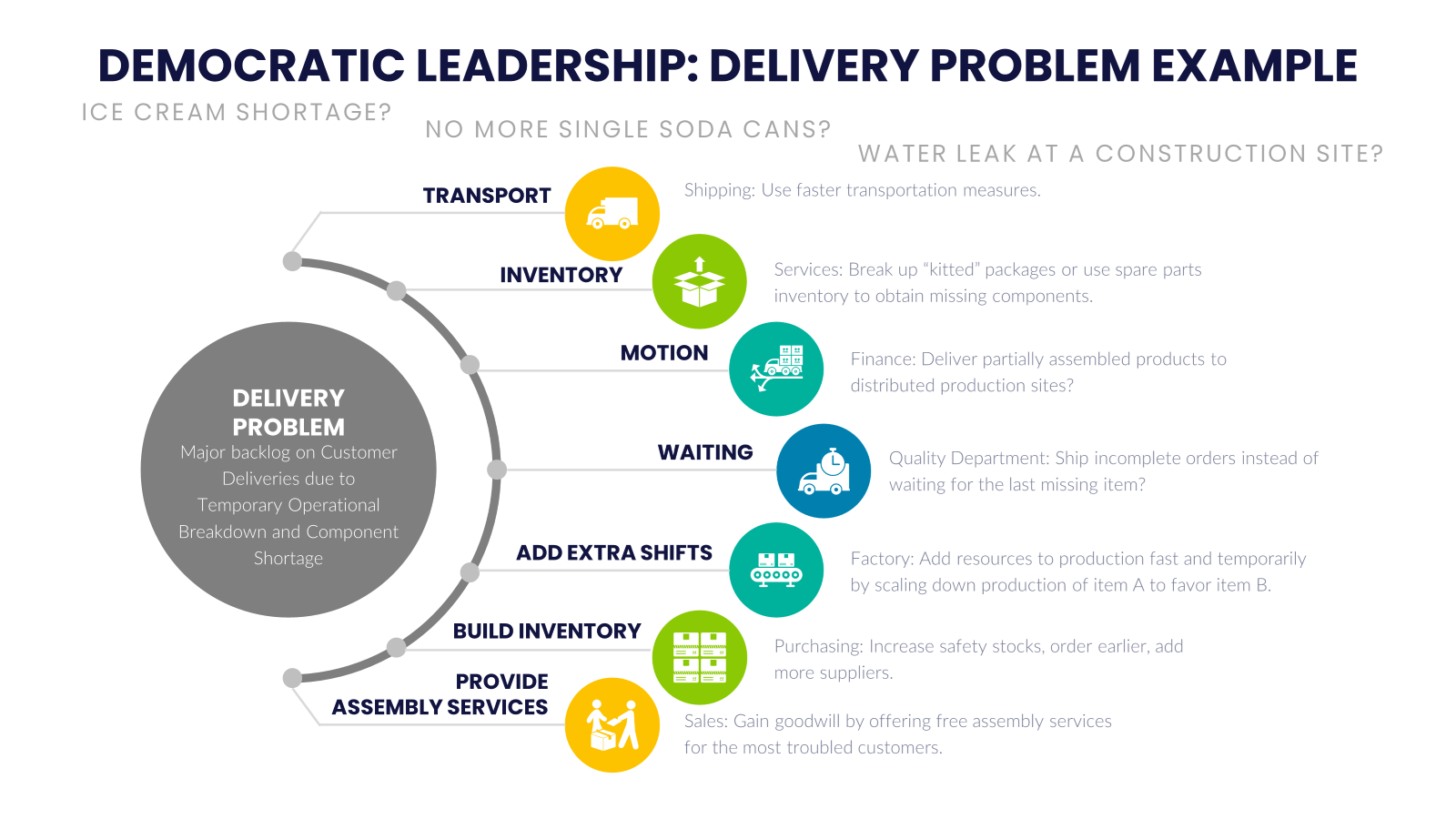 From Theory to Practice: The Eight Steps of Implementing Democratic Leadership for Strong Performance 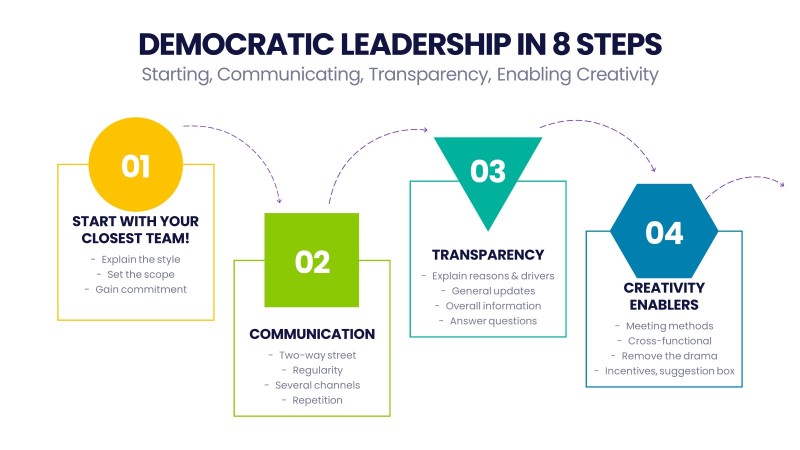 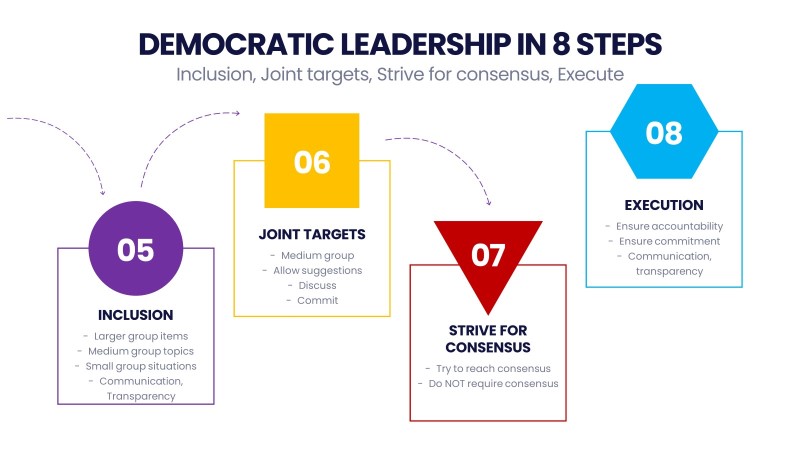 Wrap-up of the course to complete your transformation journey to unlock the true power of your team!

About The Course Teacher, Carl Lindberg

Carl Lindberg has had the fantastic opportunity to be a leader in many different areas of business. At most, he has led more than 2000 people and had financial responsibilities above 1BUSD. Carl has worked with direct reports in Americas, Europe, Middle East and Asia and employees in about twenty different countries. Carl has lived on three continents, learning about leadership and communication in different cultures.

He now wants to pass on some of the knowledge and experience he has gathered no how to truly unlock the full performance of any team! 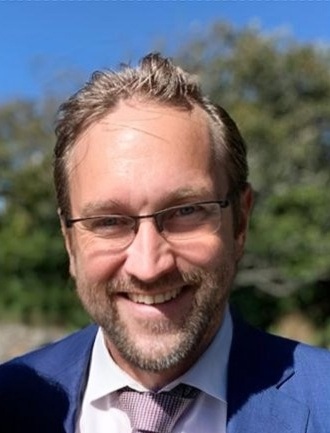 Carl regularly seeks opinions and advice. He listens well and synthesizes opinions with his own view and opinion. This approach gets people on board and make us part of decisions. He is a good communicator – both in terms of language/tone and content. Carl can be very direct when needed and he has demonstrated an ability and courage to face and approach also difficult situations in a good and honest way. He is very intelligent which is displayed in his analytical skills and ability to quickly process information and use it in decision-making. Carl is a good listener.

Carl is a leader who also reflect on his leadership and seek feedback to improve. He is also open, transparent, and flexible. He has a fantastic ability to adapt to different situations which is really good for the team. Carl works fast and very efficient, and I appreciate that he explains how he thinks and motivates different decisions.

I am a student finishing my BA program in Leadership and Management, and I'm happy to get this information because I know soon it will help me in one way or the other after completing my studies.

Improve collaboration, creativity and empowerment
in your team today and
unlock the potential of the entire team!

This type of course is not available elsewhere since it combines theory with practice and is taught by a real-life CEO who has walked the path already with these proven methods.

Get all the modules enabling you to become a better leader with a collaborative, empowered and engaged team!

NOW AVAILABLE FOR ONLY:

The regular course plus one hour of personal guidance and coaching with Carl Lindberg, in order to work on your specific needs.

One sentence summary of what they get

One sentence summary of what they get Although I am confident that you will enjoy the course and learn some great leadership skills from it, I understand if you are concerned before purchasing. You have sixty days money back guarantee and can contact Digistore24 for a refund within that time, so no need to worry.

Once you have paid for the course, you will immediately be forwarded to a landing page that contains a login link to the course, which is hosted by Coachannel. The page also contains your user information which you will need as you log in. The user credentials and the link will also be sent to you in a separate email to the address you specified upon registration and purchase. You can access the course for six months after purchase. In a nutshell: you get access to the course immediately upon payment.

What is the Format of this Course?

The course is in video format with Carl Lindberg narrating, and information packed slides to further strengthen the information Carl teaches you. Given the nature of the course, you can easily listen to the course and understand and learn the contents without seeing the video. This enables you to learn by listening as you commute, fold laundry or other suitable activities in your most likely already packed agenda.

How Long Does it Take to Complete the Course?

The course consist of roughly 2 hours and 45 minutes of video and audio material. However, it is important that you try the steps in real life, hence, I would recommend you to go through blocks one to six during the first week or two, to understand the concept, aspects and elements of democratic leadership. As you get to block 7: From Theory to Practice, I recommend you move forward at slower pace with one or two steps per week. This is to enable you to truly try the techniques in your life, observe others and how they behave, and understand the potential impact of using the techniques you have learnt. If you go too fast, there is a risk that your knowledge stays theoretical and that you do not fully transform into a new type of leader. The democratic leadership plan template is there to help you build your own schedule with concrete steps and actions to transform yourself. Depending on you and your needs, the course might take shorter or longer time to complete.
If you use this approach, you would spend about six to ten weeks with the course, and really emerge into the content and developing new practical skills that will stay with you for the future. That said, you can complete the course in less than three hours, but that means you are less likely to develop yourself.

What if I am Disappointed with the Course?

Although I am confident that you will enjoy the course and learn some great leadership skills from it, I understand if you are concerned before purchasing. You have sixt days money back guarantee and can contact Digistore24 for a refund within that time, so no need to worry.

What Platform is the Course Hosted on?

The course is sold by Digistore24, a distribution platform we cooperate with, and hosted at Coachannel.com, a professional platform built specifically for hosting and delivering online courses.The platform contains a user interface where you can easily navigate between different parts of the course, a progress indicator shows how far along you are, and where applicable, the course block page has additional information and exercises in text form below the video.